The History of Absinthe 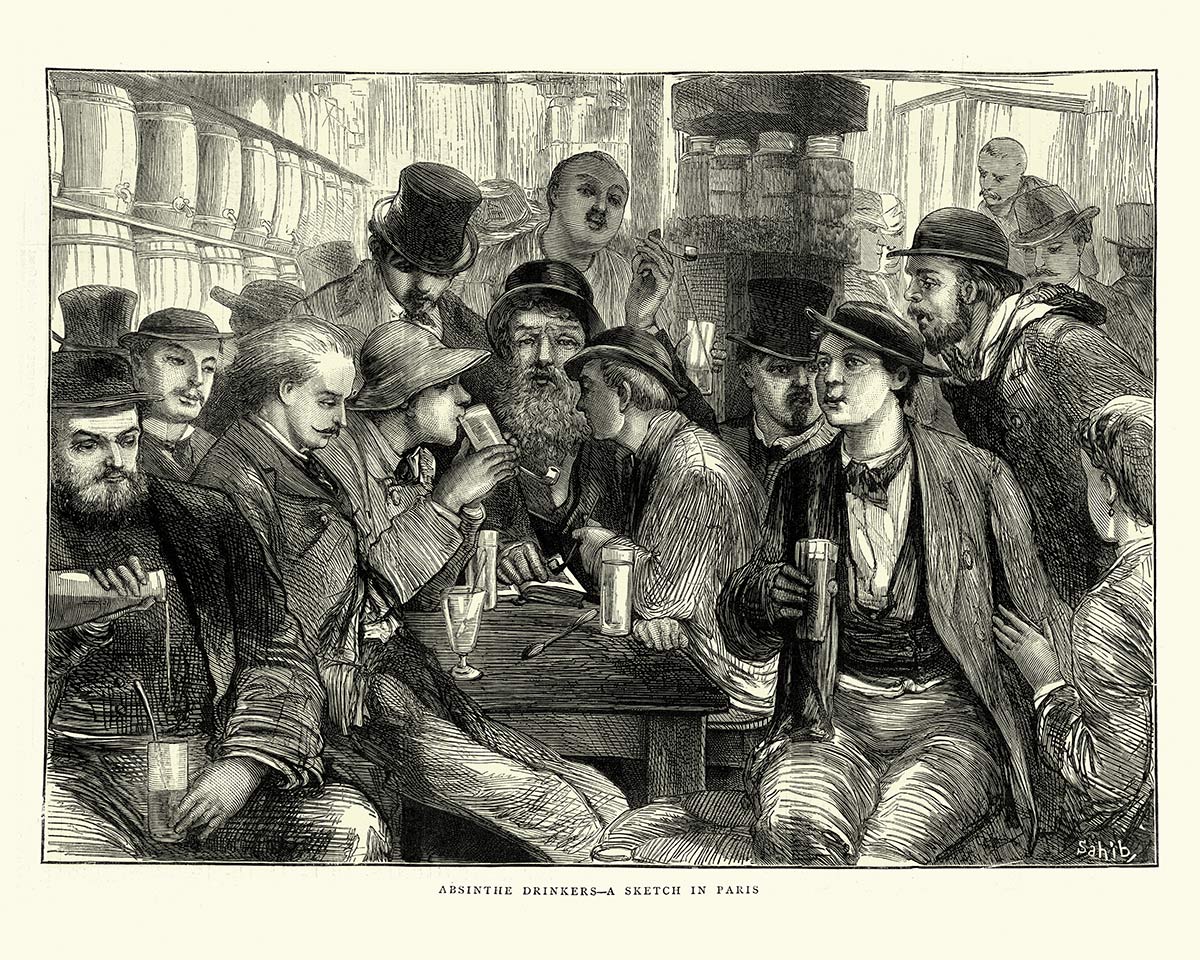 Everything you ever wanted to know about Absinthe

Drinking a spirit isn’t just about getting sloshed. It’s about tasting something hand-crafted to open up a new part of your mind. It’s an experience.

At least, that’s what I tell myself when I’m feeling pretentious.

But from the moment that glass touches my lips until I feel that warming glow from head to toe, I’m consumed by - well, a spirit. Go figure.

One spirit, in particular, has a name: la fée verte - the Green Fairy. Absinthe got that name because consuming it felt oddly different than any other form of liquor.

Not only is the buzz buzzier, it seems to put you in a sort of waking dream state. Artists (writers, in particular) couldn’t get enough of it - but nobody knew why.

Of all forms of alcoholic beverages, none have the mythical might of absinthe. Hell, it was banned in the U.S. for 95 years! For a while there, it was probably easier to buy C4 explosive than absinthe!

Don’t ask how I know that; my lawyer would tear me a new one.

Thankfully, that ban was lifted so we can enjoy it today. But let's get back to the basics: what even is absinthe?

The Birth of the Fairy

Absinthe was first distilled in the late 1700s, either by Dr. Pierre Ordinaire or two sisters named Henriod. We’re not sure which, but we know they were both making it around the same time.

As with many of our beloved potent potables, the Green Fairy started its life as a medical tincture.

It's distilled from a concoction of traditionally medicinal flowers and leaves - Green anise, fennel, and of course, wormwood.

Those three main players mixed with others playing smaller roles all come together to create a uniquely flowery and green-tinted spirit.

It’s best served in a reservoir glass, but only after water has dripped into it through a sugar cube. That creates a louche - that is to say, it makes the drink take on an almost milky appearance.

See, if you don’t give the Green Fairy a little sugar water, she might lose her temper. She’s bitter and a little grumpy, like me before I’ve had my morning coffee.

In fact, adding sugar and water means that this way of serving absinthe is technically a cocktail. That’d make it one of the earliest cocktails we know of!

But if the anise flavor is a bit too intimidating, some people make it more of a cocktail by adding lemon juice. If you’re into it, toss in an egg white and shake it up!

Some people actually call that a Green Fairy Cocktail, but it’s all just an evolution on the original.

But for now, let’s get back to the history.

In 1798, the recipe for absinthe found its way into the hands of one monsieur Henri-Louis Pernod.

If that name sounds familiar, it’s because the Pernod distillery is still cranking out the floral beverage.

But absinthe didn’t take off on its own. Two events brought absinthe from curiosity to daily sipper in France over the course of the next hundred years.

The Algerian king had a deal with pirates - his country was a safe haven for them as long as he got a share of the loot. France et al. hated that.

France also owed an old debt to Algeria. When Algeria demanded payment, France decided it was as good a place as any to invade and colonize.

This is the part where you ask what does this have to do with absinthe? Sorry, I just needed to set up some context.

Absinthe was given to French soldiers to prevent malaria, and probably before surgeries as well. This was a time before anesthetics, doctors just gave you a drink and a stick to bite on.

Due to its high alcohol content - up to 74% - absinthe could even be used to clear out an open wound in a pinch.

Since it was being made in France, absinthe was readily available and locally sourced. Militaries just love saving money.

The soldiers became infatuated with the Green Fairy. When they returned home, they started asking for it at bars.

Demand for absinthe grew steadily, but wine has always been France’s drink of choice. They have some nice wine over there...it would be a shame if something happened to it.

Sometime around 1860, the aphid called grape phyllorexa somehow made the trip from an American field to a French vineyar.

I know, that sounds boring, but it was a big deal. Those tiny bugs were responsible for what we now call the Great French Wine Blight.

For fifteen years, grape phyllorexa decimated France’s wine industry. Nearly half of all vineyards were utterly destroyed by the tiny bugs.

Where there’s scarcity, you find opportunity. The Green Fairy saw a chance to spread her wings and fly.

With French wine on the decline, penny-pinching Parisians needed to find a new go-to. Absinthe was the answer. It was made in France and didn’t rely on grapes, unlike Cognac.

Before long, the Green Fairy became ingrained into France’s drinking culture. When workers rushed to bars after a long day, they wanted absinthe.

It was so popular that the hour between 5 and 6 P.M. became known as l’heure verte - the Green hour.

The absinthe industry met with an unprecedented boom. Even after the Wine Blight ended, absinthe remained the concoction of choice for many.

The Green Fairy even used her wings to span her influence beyond French borders. Oscar Wilde, Vincent van Gogh, and Edgar Allan Poe were just a few notable absinthe imbibers.

But at the same time, there was a movement that believed alcohol was causing all of society’s problems. They wanted to ban the demon juice any way they could.

Public enemy number one: our dear pal, the Green Fairy.

The Road to Prohibition

Back in 1864, French psychiatrist Valentin Magnan conducted an experiment. He exposed one guinea pig to alcohol vapor and another to wormwood vapor.

The guinea pig exposed to wormwood had convulsions and seizures. The one exposed to alcohol was right as rain.

Just why on earth would anyone in their right mind do that?

At that time, rumors were going around that absinthe was driving people mad - actually making drinkers go insane.

Can you believe it? Our friend, the Green Fairy, slandered so heinously! And the worst part was that according to Magnan’s experiment, there might have been some truth to it.

See, there’s a chemical in wormwood called thujone. It’s that chemical that Magnan correctly blamed for the behavior of the guinea pig in his experiment.

In high enough doses, thujone can cause muscle spasms, convulsions, seizures, all that. It is also toxic to the brain. Over time, it could cause brain damage, and potentially, insanity.

As it turns out, those rumors were just that - rumors.

The amount of thujone in absinthe is so tiny that before you have a single muscle spasm, you’d drop dead from alcohol poisoning.

As for long-term brain damage - we have nothing to worry about. Modern absinthe is legally required to have so little thujone in it that it’s considered thujone free.

Unfortunately, all they had to go on back then was one spazzy guinea pig.

In the ten years between 1905 and 1915, absinthe was banned in several countries. France, Belgium, Switzerland, The Netherlands, and the U.S. all joined the bandwagon.

It was a combination of the temperance movement and absinthe’s reputation as being particularly dangerous that did our Fairy in.

The Chase for the Green Fairy was over. The haters had won.

A Saint in Our Time of Need

Here’s a question for you: if you follow the recipe for making absinthe but label it something else, is it still absinthe?

The answer, of course, is yes. It’s still very much absinthe.

Is it, though? Most countries don’t have a legal definition of what absinthe is, making a ban on absinthe almost impossible to enforce.

In 1934, for instance, the Sazerac company bottled and sold Herbsaint. It’s an almost perfect anagram of absinthe, just with an additional r.

The added r likely stands for regulate this, I dare you.

Sazerac wasn’t the only company that did it, but Herbsaint is one of the best-known absinthe substitutes. They still make it today, even though absinthe is legal again.

In 2007, the U.S. government lifted the ban on absinthe. We’d done enough research to know the Green Fairy just wasn’t the monster she was made out to be.

France followed in 2011. A slew of countries that had previously banned absinthe joined in around the same time.

Our dear friend, the Green Fairy, is free once more to inspire the masses. I encourage you to try some yourself, but do it the right way - dripping water through a sugar cube into it.

Oh, and if you do decide to summon the Green Fairy for a visit, take it easy - she’s pretty strong

Preparation: Add all ingredients into shaker with ice and shake vigorously. Serve in a coupe glass and garnish with a lemon twist.